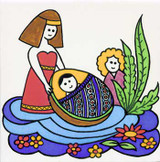 In Egypt, a son was born to a man and wife from the tribe of Levy. Seeing that he had exceptional qualities, they hid him for three months, fearing that the king of Egypt would find him and kill him. The king of Egypt wanted to kill all Hebrew male newborn babies, because they posed a threat to his kingdom. When the mother could no longer hide him, she made a basket out of bulrushes, and put baby Moses in it and laid the basket near the river bank among the reeds.

Moses and the 10 Commandments

Moses and the burning bush