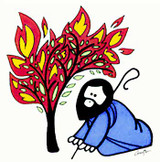 As Moses was tending to the herd, he led the flock into the desert near the mountain of God. Here the angel of God appeared to him in a flame of fire burning in a bush. Moses looked on as the bush was burning, but noticed that it was not consumed by the fire. He was intrigued by this sight, and stepped aside to watch. When God saw him step aside, He called him from inside the burning bush. God told him to take his shoes off, for he was walking on holy ground. Moses was frightened but continued to listen. He told him that he was the God of his father, God of Abraham, Isaac and Jacob. God had seen the suffering of his people in Egypt, had heard their cries and felt their pain. He had come down to save them from the Egyptians and take them out of Egypt into a land flowing with milk and honey. He told Moses to go to the pharaoh and ask him to let his people go. God told him to return to this mountain and serve Him, after he had saved his people from the Egyptians.

Moses and the 10 Commandments

Moses in the bulrushes