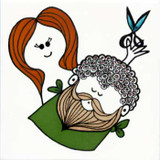 Delilah tried for the 3rd time. Samson told her that if she wove the 7 locks of his hair, he would be overcome. Delilah did so, but again Samson could not be overpowered. Delilah now urged him and insisted daily that he confide in her. Finally Samson was tired of her and confided in her. He told her that no razor had cut his hair from the time he was born. If he were shaved he would lose all his strength. So Delilah let him sleep and had his hair shaved off. He lost all his strength. The philistines came, gouged out his eyes and threw him in prison.

Samson's hair began to grow back slowly. One day, the philistines brought him out of prison so that he may entertain them. They put him between the pillars which supported the house, which was full of philistines. Samson asked the Lord to give him back his strength so that he could avenge them. So he took hold of the two pillars and bent himself with all his might. And the whole house fell upon the philistines.