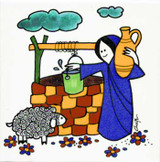 Abraham called his eldest most trusted servant and told him, "I do not want my son Isaac to marry a daughter of the Canaanites, among whom I live. Go to my country and to my relatives, and find a wife for my son Isaac." And the servant took 10 camels and departed to Mesopotamia to the city of Nahor. When he arrived, he made his camels kneel by the side of a well just outside the city. It was evening time, when the women of the city came out to

draw water from the well. And there he prayed to God to show kindness to his master Abraham: "Let it come to pass, that the woman to whom I say "Put down your pitcher and give me a drink", if she says "Drink. Here is water for your camels also", then let her be the one that you have appointed to be Isaac's wife."

After the camels were done drinking, the servant took out a gold earring and 2 gold bracelets and gave them to Rebecca and asked, "whose daughter are you? is there room in your house for us to stay?" And Rebecca replied, "I am Rebecca, daughter of Bethuel, son of Milcah. Yes we have room in our house for you and your camels." And the servant thanked and worshipped God for leading him to the brethren of his master Abraham.

And he went to their house and told them who he was and why he had come, and how the Lord had chosen Rebecca to be Isaac's wife. And they agreed to give their daughter Rebecca away to marry Isaac, as the Lord had spoken. And Isaac took Rebeccah into his mother's tent, and she became his wife.