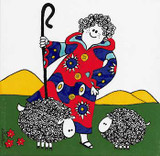 Story of Joseph and his many colored coat

Jacob had 12 sons of which Joseph was his favorite. So he made him a coat of many colors. Joseph's brothers hated the fact that he was their father's favorite. They called him the dreamer, because he had dreams that all would obey and honor him. His brothers hated him even more for his dreams.

One day, Jacob told Joseph to go see how his brothers were tending the flock. When they saw Joseph approach wearing his coat of many colors, they conspired to kill him. So they stripped Joseph of his coat of many colors, and threw him in a pit without any water or food. They then sold him to merchants heading for Egypt, for the sum of 20 silver pieces.