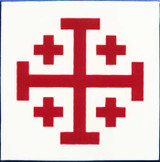 The Jerusalem Cross, also known as the Crusader's cross, was first used as a coat of arms for the Latin Kingdom in Jerusalem. During the Crusades, it was referred to as the "Crusaders Cross." The four small crosses are symbolic of the four Gospels proclaimed to the four corners of the earth, beginning in Jerusalem, with the large cross symbolizing the person of Christ. The crusader cross appeared on the coat-of-arms of Godfrey of Bouillon, the first ruler of the Latin Kingdom of Jerusalem. It was embodied in the heraldry of the Crusaders.

Pray for the peace of Jerusalem