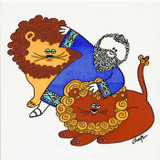 King Nebuchadnezzar of Babylon besieged Jerusalem and captured it. He ordered that some Israelites - intelligent and of noble origin - be brought in for service in his palace. Among these was Daniel, who had a strong spirit and was very intelligent, and found favor with the kings of Babylon.

Under King Darius, Daniel was appointed to one of three presidents presiding over the governors of the land. Daniel was the king's favorite and distinguished himself from other presidents and governors because of his strong spirit. The others were envious of him, and conspired to ruin his relationship with the king.

They went to the king and asked him to establish a new law whereby whoever petitions and prays to any god for 30 days, shall be thrown into the lion's den. And the king signed the law. When Daniel heard of the new law, he went to his house and started praying to his God three times a day. His accusers then saw him pray and immediately told the king. The king had no choice, and ordered that Daniel be thrown in the lion's den.

The next day, the king went to the lion's den and asked whether the God of Daniel had saved him from the lions. Daniel replied that his God had sent His angel and shut the lions' mouths so that they would not harm him. The king was surprised and pleased. He ordered Daniel to be lifted out of the lion's den, and saw that no injuries were to be found on his body. The king then ordered his accusers and their families to be thrown in the lion's den. They were all devoured by the lions. The king then made a decree that the God of Daniel should be revered in the kingdom, for it was He who had saved Daniel from the lions