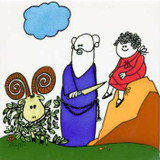 The Lord wanted to test Abraham's faith in Him, and so he told Abraham to take his only son Isaac and give him up as a burnt offering on one of the mountains. Abraham took his son, cut some wood for the burnt offering, took a knife and went to the mountain. And they came to the place where Abraham was to sacrifice Isaac. Abraham built an alter, laid down the wood, tied Isaac and laid him down on the wood upon the alter. He took the knife in his hand and was about to sacrifice Isaac, when the angel of the Lord intervened, calling Abraham and telling him not to sacrifice his only son Isaac, "Now I know that you fear God and would not hesitate to sacrifice your only son for His sake." Abraham lifted up his eyes and saw behind him a ram caught in the bush. He took the ram and offered it as sacrifice instead of Isaac.